I would like to share my story first by saying all glory to the almighty god, amen

Because without god nothing can be possible i was trying hoping for a big and positive come back to serve you people and here i am once for a very long time.

You guys (viewers) have been left neglected with my sports updates and other news.

Conclusion I would like to say 2020 is going to be a positive year for each and every person,may god be with everyone,AMEN.

END_OF_DOCUMENT_TOKEN_TO_BE_REPLACED

Sometimes, life is as simple as a phone call. In Neymar and PSG’s case, it was indeed a phone call that made the biggest transfer in football history possible. After three weeks of negotiations, brainstormings, discussions and arguments, the Parisians welcomed the Brazilian superstar on Friday. And like every transfer, the inside story is the most fascinating aspect.

Neymar is a Paris Saint-Germain player, a sentence that the French club never thought people would say. It was a dream that looked unreachable, unfeasible.

PSG had tried hard last summer. They thought they had their man, one of those superstars they have been chasing for years. Instead, they were shocked when the Brazilian told them that he had changed his mind and he was signing a new deal with Barcelona.

PSG felt used, and were used, but they moved on quickly. This summer, they had forgotten about Neymar. In order of interest, their main targets were Kylian Mbappé, Alexis Sánchez, Philippe Coutinho or Sergio Agüero. They thought their nemesis was staying put. But one call changed everything.

When the Brazilian’s entourage called Nasser al-Khelaifi, the PSG chairman, to inform him that Neymar was ready to leave Barcelona, there was no hesitation. Paris needed Neymar to take their project to a new level, to reach the stars. So the secret talks started.

After renewing with the Catalan club last November, Neymar’s release clause went up from €190m to €222m. If the Parisians wanted their man, they would have to cough up the whole amount of the release clause, paying the biggest transfer fee ever. After a few internal meetings, the PSG hierarchy decided that the club could afford to recruit the superstar. They remained adamant that the commercial impact of Neymar’s arrival (shirt sales, extra ticket revenues, new sponsorship deals) would cover most of the cost of the transfer anyway. The French club did not want to be at fault with the regulations of financial fair play. They even considered at some point recruiting both Neymar and Sánchez from Arsenal before concentrating solely on the Brazilian.

The player and PSG quickly agreed on a five-year deal worth €30m net per season. Pini Zahavi, the Israeli agent, who brokered the deal for Neymar to join Barcelona from Santos in the summer 2013, was at the heart of all the negotiations. PSG’s lawyers, Nataf Fajgenbaum & Associés, drafted the contract, ready to be signed.

In Paris, Dani Alves, one of Neymar’s best friends and a former Barcelona team-mate, lobbied for his fellow Brazilian to join him in Paris where he had just signed. On 14 July, Neymar returned to training with Barcelona after his holidays. 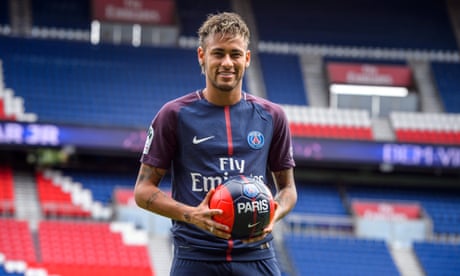 ‘Not about the money’: Neymar checks in at PSG relishing his new challenge

On 18 July, rumours of the potential biggest transfer in history appeared for the first time on social media. Three days later, French and Catalan media stated that the deal was pretty much done. Yet it took another two weeks before it became official. Barcelona were determined to do everything they could to keep Neymar at the Camp Nou. From Lionel Messi to Luis Suárez and Gerard Piqué, they all tried to convince him to stay.

Despite the agreement being in place, the player was still not sure what to do. His father, Neymar Sr, who is the biggest influence on him, wanted him to stay in Catalonia. Neymar Jr does not usually contradict him. He did this time.

As much as he loves Messi and loves playing with him, he wanted his own team. He wanted to be the boss, the centre of attention, to be a Ballon d’Or contender. He also wanted a new challenge after winning everything possible in four seasons at Barcelona. His ambitions matched those of PSG.

There, in the dressing room, he already had some of his best friends: Not only Alves but also Lucas Moura, whom he met when they were six years old; Marquinhos, with whom he goes on holiday; and Thiago Silva, who was his captain with Brazil.

Neymar’s mind was now set on moving to the French capital. On Wednesday, he announced his decision to Barcelona. His mother and his sister flew over from Brazil to Paris. They moved into a suite at the luxurious Royal Monceau hotel in the centre of the city.

Neymar, via Porto where he completed his medical, finally signed his PSG contract in Barcelona on Thursday alongside Jean-Claude Blanc, the PSG CEO and Marcos Motta, one of his lawyers. Which number will he wear? Javier Pastore, who took over the No10 shirt after the departure of Zlatan Ibrahimovic last summer, announced that he had given Neymar the famous number.

Everything was ready. The unveiling could start. Neymar arrived in Paris by private jet on Friday morning. The first day of his new life.

… we have a small favour to ask. More people are reading the Guardian than ever but advertising revenues across the media are falling fast. And unlike many news organisations, we haven’t put up a paywall – we want to keep our journalism as open as we can. So you can see why we need to ask for your help. The Guardian’s independent, investigative journalism takes a lot of time, money and hard work to produce. But we do it because we believe our perspective matters – because it might well be your perspective, too.

I appreciate there not being a paywall: it is more democratic for the media to be available for all and not a commodity to be purchased by a few. I’m happy to make a contribution so others with less means still have access to information.Thomasine F-R.

If everyone who reads our reporting, who likes it, helps to support it, our future would be much more secure.

The Dallas Police Department is asking for the public’s assistance in locating endangered missing person, Ms. Marisol Espinosa. Ms. Espinosa was last seen on December 29, 2015 at about 8:00 a.m. leaving her residence in the 7700 block of Aurora Street. On January 1, 2016, Ms. Espinosa’s vehicle was found abandoned behind the apartment complex, Las Lomas Apartments at 6161 Trail Glen Drive. Ms. Espinosa is described as a 34 year old Latin female and is 5’5 and weighs 125 pounds.

If anyone has seen Ms. Marisol Espinosa or has any information about her whereabouts, please contact the Dallas Police Department Missing Persons Unit at 214-671-4268.

The Simpsons Tapped Out Addicts

Update: Building actions are back, which means vandalism is back as well.  Be careful when tapping in a neighbor’s town and only tap the bears.  Tapping buildings will count against your daily actions for the day…

New Year, new act.  Out with the old, in with the new!  Christmas is over…bring on Maggie and the fun!

Remember…this is an automatic change in your game.  Nothing to download, it should just start up in your game..

Watts Up With That?

From the “say your prayers, we’re gonna roast” department.

On January 25th, 2006, while at the Sundance film festival, screening “An Inconvenient Truth”, Al Gore said this as chronicled in an article by CBS News:

The former vice president came to town for the premiere of “An Inconvenient Truth,” a documentary chronicling what has become his crusade since losing the 2000 presidential election: Educating the masses that global warming is about to toast our ecology and our way of life.

Gore has been saying it for decades, since a college class in the 1960s convinced him that greenhouse gases from oil, coal and other carbon emissions were trapping the sun’s heat in the atmosphere, resulting in a glacial meltdown that could flood much of the planet.

Americans have been hearing it for decades, wavering between belief and skepticism that it all may just be a natural part of Earth’s…

Bournemouth is one of the clubs to land a deal with Roma’s Juan iturbe on season loan “am happy to get a first eleven team” said iturbe in the press.

I’ve saved all the text messages my sister and I sent to each other this year.

I thought it would be comforting to be able to look at them when I’m sad and know that we connected when everything else got stripped away. I saved them but now it’s a bit of a double-edged sword because somehow my last message to her went astray. It didn’t send and now when I look at my phone it has her name and next to that is the line “message send failure”. And I’m not sure whether to laugh or cry. I’m not sure whether to be distressed or comforted. You see I know she would agree that in some ways “message send failure” sums up our relationship perfectly.We spent a lot years trying to communicate with each other but neither of us were very good at getting the message across. It was…